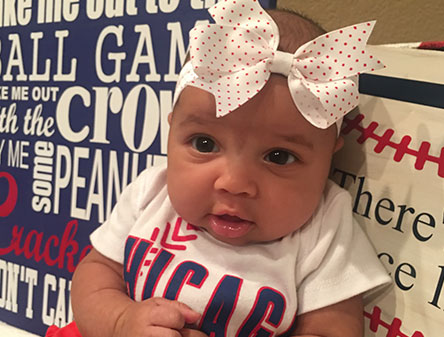 “I knew this child deserved more than I could give her, so in some ways, it was an easy decision.”

I prayed, I contemplated, and I finally decided that I would have this child and give her up for adoption. I was already practically a single mother of one baby girl who was only three months old then. I felt irresponsible and ashamed that I got pregnant again so soon. Abortion was always out of the picture and after talking to my mom I knew adoption was the best choice for both me and my girls. My mother cried to me about her and my father’s fertility issues and reassured me this was a good idea. The biggest blessing I will ever be able to give to someone.

They adopted me and my three siblings from my birthmother and that’s a constant reminder of the love my parents longed for. I thought a lot that night about the women who were born to be mothers and have everything to offer a child, yet they have the hardest times conceiving. It sank into my gut that evening, I was going to change someone’s life forever.

I knew this child deserved more than I could give her, so in some ways, it was an easy decision. But it was also the hardest decision of my life. It confirmed for me who I was as a person and it influenced almost every decision I made after that. A majority of my family was supportive. They trusted me and my judgment. A great group of friends helped me the entire way and also had great influence on me documenting my experience. There were some of my “best friends” who told me I was heartless and bragged about how they would never give their child up for adoption. Living paycheck to paycheck and milking funds from the government is not where I wanted my life to be. I wanted my girls to never want or need anything and to have the best childhoods and eventually go to college without the stress I had wondering, “How will I pay for this?” I knew I could afford all of those opportunities to one child, but not two.

I spent weeks Googling and searching for the best adoption professionals to go through. Looking through hundreds of profiles both online and in paper form. Finally I received my last adoption packet of families. My classmates and I sat in class passing them around. We read them, looked at the pictures of them, their families, their homes, and none of us got that gut instinct that told us, “This is them.” As I gathered up the profiles to put back into the folder, there was one left inside of the envelope. I pulled it out and there was Jen & Joe. My eyes watered at their pictures because of the way Joe looked at Jen in all of the pictures and then I began to read. They were together 10+ years, both working in the school system, this would be the first grandchild on both sides of their families, and they had the cutest dog they had been parents to named Bruno. The last sentence in their profile mentioned God and I knew then and there, they were the couple meant to raise her. I was sent to make their family complete and I was going to do just that.

A strong faith and family bonds were important to me and I wanted a couple to allow me to be involved in my child’s life as the bonus mom because once I had her, she was theirs. She was going to be their daughter, not mine. When I first texted Jen we made small talk and that night when Joe got home Jen finally called. We talked a little and asked each other questions and finally I told them, “I want you two to raise my child as your own, and you are the family I have chosen.” We all cried on the phone together. A few days after Jen sent me a photo of their adoption announcement that they took three or four months prior to ever connecting with me. They were in a baseball dugout holding a onesie and there was a baseball cap in the photo with the letter “C”. I joked to Jen about how it must be fate considering my name starts with a C and before they ever met me that was the baseball cap they had chosen. It wasn’t a joke at all, because us finding each other was fate and I believe everything happens for a reason.

Jen and Joe are great. They accepted me and my daughter with open arms as they awaited the arrival of their little girl. The adoption process was long, but the love was instant. I loved them because they were going to take my child who doesn’t share the same bloodline, who may not ever look like them, in as their own and love her like I knew I couldn’t at the time. When I went in for delivery I was very calm because I knew I had Jen and Joe’s entire family there supporting me and doing all they could to make me feel comfortable. They watched my toddler who was finally running and walking at the time, they made me a sweet care package to have at the hospital, and upon my departure they brought me and my daughter letters they had written. They were so thankful and they now considered us family and I appreciated them more than I could ever thank them.

There was a moment before signing over all of my rights when I wanted to see my child before leaving the hospital. I started having doubts on whether I could do this or not. Jen said to everyone, “Let’s leave and give her a minute alone.” That ten minutes I had with my child confirmed everything in my gut was right. That I was doing the right thing and I was doing it for her. I called Jen in to get the baby and asked her to send the lawyers in because I was ready to sign the papers. Everyone sat anxiously and once the paperwork was done I was showered with hugs and thank yous from the entire family. I left the hospital that day in peace and my mind was at ease because I knew she was in the best hands and that there would be more than enough love for her.

This entire experience has taught me so much about myself and I learned that we as mothers and as women are capable of anything when it is in the best interest of someone we love more than we love ourselves. I understand now that adoption is a kind, respectful, and loving decision. To other mothers considering this option, I want to tell you, people will have their own misconceptions that we are lazy, uncaring, and irresponsible. Others will see the power and love and commitment it takes to give our child to someone better able to provide a secure home. My story is a love story that has changed the lives of so many people. It’s changed my life tremendously and it was all done in the love I have for both of my girls and now the love I have for Jen and Joe.